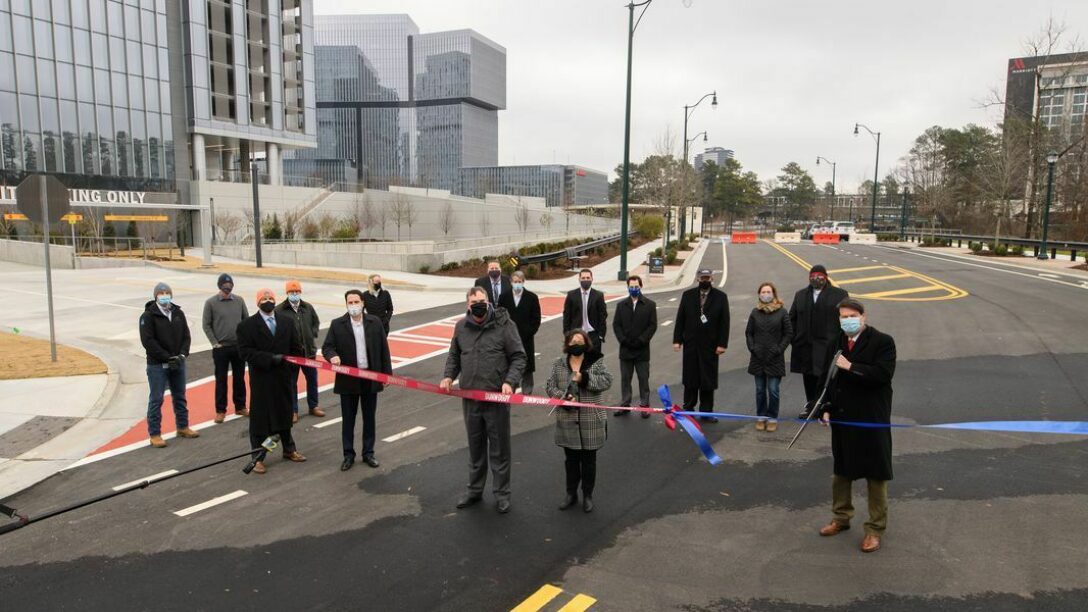 Dunwoody, Sandy Springs celebrate the opening of the Springwood Connector

“We’re excited to celebrate this a great, collaborative effort involving two cities and two development teams,” said Mayor Lynn Deutsch. “The Springwood Connector provides an important new access point for those who live and work in the Perimeter.”

“Improving transportation connectivity doesn’t stop at a city’s borders,” added Mayor Paul. “Our cities have a history of partnership which adds value to commuters throughout the region.”

The new roadway was built entirely with private-sector funds. State Farm donated part of the land and paid for design and construction costs of the Dunwoody portion of the road in conjunction with the company’s new regional hub, which contains 1.1 million square feet of office space, developed by KDC, in three buildings. State Farm’s project team also provided the permitting and coordination required for the road to cross Perimeter Creek. Pollack Shores completed the segment in Sandy Springs as part of a new housing development.

“Today is a great example of the strength of the working relationship between State Farm and our local community” said Rich Fatzynytz, State Farm Administrative Services Director. “We look forward to - when we can again - live, work and play here.”

By adding a secondary east-west connection in the area, the roadway is projected to alleviate traffic on Hammond Drive by diverting up to 8,000 vehicles per day. The Springwood Connector also supports transit with new sidewalks and bicycle lanes within walking distance to the Dunwoody MARTA Station.